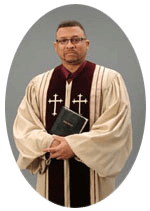 Reverend Samuel A. King, Jr., was born and raised in Miami, FL. Shortly after graduating from Miami Northwestern Senior High School, he joined the U.S. Marine Corps and faithfully served his country. After 20 years of service, he honorably retired on May 31, 2004.

In August 1998, Reverend King accepted the call to the Gospel Ministry at Gospel of Holiness Church of God in Christ, Kaneohe Bay, HI. He preached his initial sermon on September 25, 1998 and was licensed by Pastor Randy K. Melton on October 25, 1998.

After relocating to Maryland, he joined Pleasant Grove Missionary Baptist Church and was licensed under the Baptist faith on November 5, 2000 by Pastor Carl V. Messiah. He was ordained into the Gospel Ministry on May 25, 2002. At Pleasant Grove, Reverend King served faithfully as the Youth Minister, Wednesday Night Bible Study Instructor, New Members Orientation Instructor, and Adult Sunday School Teacher. On January 2, 2011, he was appointed to serve as Assistant to the Pastor by Pastor Messiah.

Reverend King received a Master of Theology Degree on June 3, 2017 from Wilbur H. Waters School of Religion, Inc. and Theological Seminary, where he currently serves as an Instructor and the Second Vice-President. 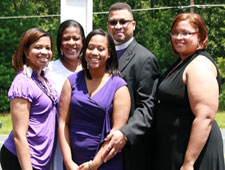 Reverend King is happily married to the former Eunice M. Johnson of Gary, Indiana. They are the proud parents of three daughters: Samona, Samiesha, and Samiya. He is affectionately called “Pop Pop” by his grandchildren, who are his pride and joy.

Reverend King’s ministry is dedicated to building God’s Kingdom and addressing the needs of the congregation and the community. His anchor scripture is Philippians 4:13, “I can do all things through Christ who strengthens me.”

Click here for a copy of Reverend King’s bio.

SUNDAY CHURCH SCHOOL SUNDAYS AT 9:30 AM

All Rights Reserved | Copyright 2021 © Site By The Church Online